Barking Mouse Studio is Danielle Swank and Jim Fleming. Lost Toys is the first game that they’ve spent more than a weekend working on. It’s the result of months of intense discussions and hand gestures (Danielle acted out the opening scene by pretending she was an airplane and zooming around). Programming and design are done by both of them, since Danielle is an artist that took math classes for fun and Jim is an engineer that makes art.

We released Lost Toys on Jan 9th 2014. Our studio is based in San Francisco and was founded in 2012.

“The visuals on Lost Toys are incredible.” — Codame

“Lost Toys is the type of game you rarely see on mobile and tablet, which is why it seems so refreshing. It’s a game that isn’t about creating tension as it is about releasing it, which is the biggest draw.” — Indie Haven

“Its a simple premise with a clean, beautiful, peaceful execution.” — Harry Balls

More about our experience making Lost Toys on Gamesauce.

Lost Toys is a mentally engaging 3D puzzle game of profound beauty, depth and challenge. Toys are lost, broken, or forgotten. Fixing them promises to right this hauntingly gorgeous chamber and restore the childhood innocence that has been lost.

Spiral down to discover a surreal world populated by discarded, mixed-up toys hanging lifelessly from the ceiling. Reconstruct the jumbled toys to reveal their original shapes and to progress through 4 chapters and 32 levels in this gothic masterpiece.

Piano music by Peter Rudenko. 15 Etudes, 2010. The Fall is used throughout the game.

Lost Toys is about a lot of things, but one of them is that feeling of strangeness that happens in dreams right before you wake up. It takes place in the transitional hours of the early morning or late afternoon, in a place that's vaguely familiar but disorientating. The game is constantly reinforcing that dichotomy. Dark to light, grey to color, static to chords, chaos to order and ruin to resolution.

There are no instructions. Players are allowed to discover the rules of the game world at their own pace. As a game designer this can be hard to watch at times, but to do otherwise would rob the player of the excitement of discovery. Instead, cinematic techniques like depth of field are used to gently direct the players attention while the game world accommodates different play styles.

Likewise, all external motivations are removed. There are no timers, points or scores in Lost Toys. The player doesn't play "against" anything but themselves. If they come up with a novel way to solve a puzzle, there's no way to immediately tweet their solution or see how they compare to other players. The game encourages the dual processes of introspection and exploration. Players must look inward to find solutions and are only allowed to explore the game world through those solutions.

Just like the puzzles themselves, the game world is revealed in pieces. In the beginning, nothing is known about the environment. The puzzles are the first parts shown. Next comes the floor, some walls and a window. From there, the rest of the game world is slowly peeled back and added to as the player finds their solutions.

The game's story is a personal experience. As the developers, both Jim and I have our own interpretations because we experience the world differently. In the same way, the player gets to determine what the game means for themselves and hopefully they will come away with feeling that the world is a slightly bigger and slightly odder place then they thought.

We're happy to give out review copies to members of the press. Our email address is [email protected] Lost Toys is designed to be played on an iPhone (4S+), iPad (2+) or an iPad mini and numerous Android devices. It can be installed via TestFlight or Google Play.

The first chapter of the game contains six levels and represents a fair introduction while the second chapter provides extended gameplay. 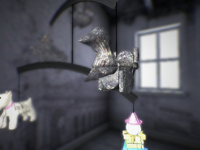 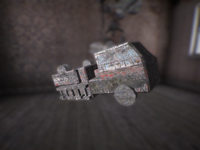 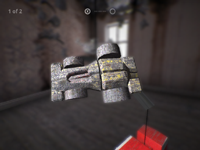 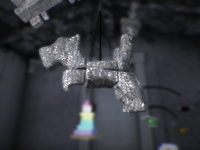 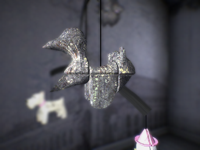